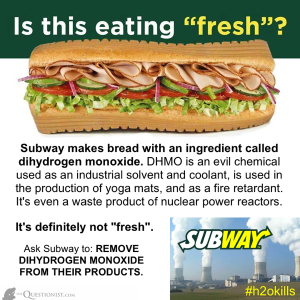 The success of today’s blog depends on you, the citizen concerned about Dihydrogen Monoxide.  Dihydrogen monoxide is colorless, odorless, tasteless, and kills uncounted thousands of people every year. Most of these deaths are caused by accidental inhalation of DHMO, but the dangers of dihydrogen monoxide do not end there. Prolonged exposure to its solid form causes severe tissue damage. Symptoms of DHMO ingestion can include excessive sweating and urination, and possibly a bloated feeling, nausea, vomiting and body electrolyte imbalance. For those who have become dependent, DHMO withdrawal means certain death.

Please keep comments appropriate to the spirit, intent, and content of this particular blog post.  Deniers of the hazards associated with DHMO are to be treated with a level of respect appropriate to their responses and interactions with other respondents.  Likewise advocates of action and activities regarding the mitigating of hazards posed by dihydrogen monoxide are encouraged to interact appropriately.

I have heard that DHMO has also been called Oxygen Dihydride as well as Hydrogen Hydroxide which are potentially terms designed to confuse and allay concerns regarding DHMO but that may be merely conspiratorial thought processes at play.

We do know that Dihydrogen Monoxide:

One thought on “Dihydrogen Monoxide warning”